The CDT-ACM away day took place at the Cavendish Laboratory at Cambridge University on Friday 3 August. Students were divided […] 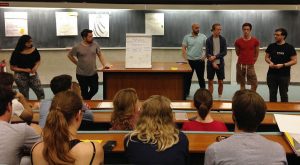 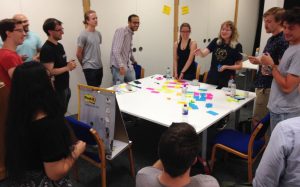 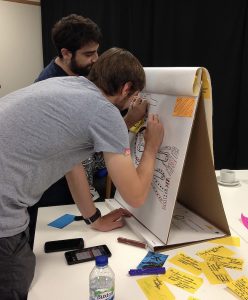 The CDT-ACM away day took place at the Cavendish Laboratory at Cambridge University on Friday 3 August. Students were divided into teams and asked to design a material – a prototype technology or idea – that is currently in the conception or laboratory phase, and to determine how they would scale up the technology or idea to be mass produced for commercial exploitation and/or societal benefit. Students were asked to include advanced materials characterisation in the scale up process. Along with designing the material, they were also asked to consider marketing, safety issues, environmental impact, and financial and distribution costs.

Ideas proposed by the students included d a system to absorb infrared light to power the ‘Gherkin’ building in the City of London. Another used advanced material characterisation techniques to sort through recyclable waste. Students were encouraged to engage in creative thinking skills and to stretch their ideas as far as they could.

At the end of the day the teams pitched their idea to the rest of the students and cinema vouchers were awarded to the team who were considered to give the best pitch. Congratulations go to the winning team of Emily Hofmann, Roisin O’Connell, Mohamed Koronfel, Oscar Williams and Tommaso Costantini who designed an air filtration system using nanotube filters for the London Underground.